Hosted by Falling For Fiction, the Hookers and Hangers Blogfest aims at getting writers to post the first lines (hooks) and last lines (hangers) of their chapters from their current WIP. We can post as many as we like, and the judges (the Falling For Fiction ladies) will be judging everyone’s first three hookers and first three hangers. They will each pick two winners (MOST ENTICING HOOKER and MOST IMPOSSIBLE HANGER) making a total of ten winners… Winners will receive a 10 page (double spaced) critique and a Friday Spotlight on Falling For Fiction.

So, without further ado (especially since I’m late to this party), here are my first lines from the first 3 chapters of my WIP THE LAST QUEEN (YA High Fantasy):

In the Darklands, a power struggle between Vampires, Wolfmen and Humans is igniting, shattering the lives of a young princess, a warrior and a slave boy whose destinies seem meant to intertwine.

“The door slammed open behind Araminta and she felt a hand press against her mouth.”

“Theron shook off his fear and tried to gather his thoughts.”

“Elian felt a splash of cold water against his face and a hard slap.”

*Wednesday update: here are the hangers from the last four chapters of THE LAST QUEEN…*

“Theron had granted him his freedom because he had known from the start that he would die in the City of Light.”

“But before he had time to realise what he was doing, he collapsed on the muddy ground and felt everything disappear.”

“Come on, Araminta,” Rowan urged her in a murmur. “Bring him back with you.”

“It was a perfect day, and he was in love with a queen.”

This is a blog hop, so make sure to visit the other writers’ blogs here. And feel free to comment!

A few tips I picked up along the way on how not to mess up your novel from the start… or on how to hook your reader with your first paragraph.

What you shouldn’t start your novel with:

–          The weather report: “It was warm and cloudy with a chance of scattered showers on the day Harry and Sally met.” Just start with Harry meeting Sally and include the weather later.

–          Your main character waking up and proceeding to having a normal day: “It was a day like any other day and Sally woke up, got out of bed, hopped in the shower and got dressed like she did every day. Little did she know that it was the day her life was going to change…” Just fast forward to the actual life-changing event.

–          A description of your novel’s setting: “Once upon a time, in a land where there were deep forests, green pastures and mirror-like lakes…” Action must come first, THEN the setting and world-building.

–          Your main character running: “Sally was running through the woods and she could hear the beast not far behind her.” Sure, it is an in medias res situation. But it has been done so many times before and you can be much more original.

–          A sex scene: “Sally screamed with pleasure and collapsed on Harry’s muscular body.” Unless you’re writing erotica or romance, this is to be avoided on your first page.

–          A prologue that gives away the ending: “Sally was running through the woods, knowing she had no way of escaping Harry’s murderous intent. Yet when they had met six months before, she would have never guessed their relationship would end like this.” The fact that Twilight has such a prologue doesn’t mean you have to do it too. 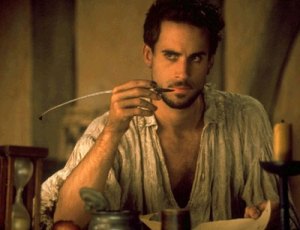 What you should start your novel with:

What you could start your novel with:

–          Your main character waking up and everything is different: “When I wake up, the other side of the bed is cold.”  The Hunger Games by Suzanne Collins.

–          A meaningful prologue: “A mile above Oz, the Witch balanced on the wind’s foreward edge, as if she were a green fleck of the land itself, flung up and sent wheeling away by the turbulent air.” Wicked: The Life and Times of the Wicked Witch of the West by Gregory Maguire

–          One sentence from a dialogue followed by some narration: “I SEE …” said the vampire thoughtfully, and slowly he walked across the room towards the window.” Interview with the Vampire by Anne Rice.

So how does your novel start? Have you avoided all the above pitfalls ? Do you think these ‘rules’ for opening are worth following? Leave me a comment, I’d love to hear your thoughts!