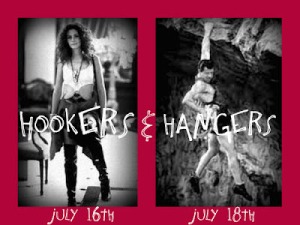 Hosted by Falling For Fiction, the Hookers and Hangers Blogfest aims at getting writers to post the first lines (hooks) and last lines (hangers) of their chapters from their current WIP. We can post as many as we like, and the judges (the Falling For Fiction ladies) will be judging everyone’s first three hookers and first three hangers. They will each pick two winners (MOST ENTICING HOOKER and MOST IMPOSSIBLE HANGER) making a total of ten winners… Winners will receive a 10 page (double spaced) critique and a Friday Spotlight on Falling For Fiction.

So, without further ado (especially since I’m late to this party), here are my first lines from the first 3 chapters of my WIP THE LAST QUEEN (YA High Fantasy):

In the Darklands, a power struggle between Vampires, Wolfmen and Humans is igniting, shattering the lives of a young princess, a warrior and a slave boy whose destinies seem meant to intertwine.

“The door slammed open behind Araminta and she felt a hand press against her mouth.”

“Theron shook off his fear and tried to gather his thoughts.”

“Elian felt a splash of cold water against his face and a hard slap.”

*Wednesday update: here are the hangers from the last four chapters of THE LAST QUEEN…*

“Theron had granted him his freedom because he had known from the start that he would die in the City of Light.”

“But before he had time to realise what he was doing, he collapsed on the muddy ground and felt everything disappear.”

“Come on, Araminta,” Rowan urged her in a murmur. “Bring him back with you.”

“It was a perfect day, and he was in love with a queen.”

This is a blog hop, so make sure to visit the other writers’ blogs here. And feel free to comment!