Today I’m waiting on THE FOREVER SONG (Blood of Eden #3) by Julie Kagawa (expected publication: 15th April 2014 by Harlequin Teen). I enjoyed the first two books in this YA Fantasy trilogy (although THE IMMORTAL RULES was a bit slow-paced, THE ETERNITY CURE really grabbed me). And now I can’t wait to read the finale and find out what will happen to Allie and Zeke! 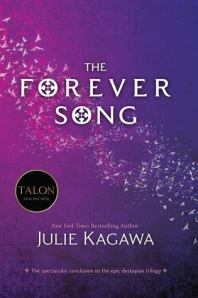 VENGEANCE WILL BE HERS

Allison Sekemoto once struggled with the question: human or monster?

With the death of her love, Zeke, she has her answer.

Allie will embrace her cold vampire side to hunt down and end Sarren, the psychopathic vampire who murdered Zeke. But the trail is bloody and long, and Sarren has left many surprises for Allie and her companions—her creator, Kanin, and her blood brother, Jackal. The trail is leading straight to the one place they must protect at any cost—the last vampire-free zone on Earth, Eden. And Sarren has one final, brutal shock in store for Allie.

In a ruined world where no life is sacred and former allies can turn on you in one heartbeat, Allie will face her darkest days. And if she succeeds, triumph is short-lived in the face of surviving forever alone.

Have you read The Immortal Rules and The Eternity Cure? Is The Forever Song on your TBR list? What are you waiting on this week?

This week I’m reading a vampire book again: The Immortal Rules by Julie Kagawa (first published in April 2012 by Harlequin Teen). I have never read Julie Kagawa’s other YA series The Iron Fey but I couldn’t wait to get my hands on her new vampire series Blood of Eden. Book 2 of this series, entitled The Eternity Cure, is scheduled to be released in May 2013. In the meantime, I suggest you check out Book 1…

“In a future world, vampires reign. Humans are blood cattle. And one girl will search for the key to save humanity.”Allison Sekemoto survives in the Fringe, the outermost circle of a vampire city. By day, she and her crew scavenge for food. By night, any one of them could be eaten.

Some days, all that drives Allie is her hatred of “them.” The vampires who keep humans as blood cattle. Until the night Allie herself is attacked–and given the ultimate choice. Die…or become one of the monsters.

Faced with her own mortality, Allie becomes what she despises most. To survive, she must learn the rules of being immortal, including the most important: go long enough without human blood, and you will go mad.

Then Allie is forced to flee into the unknown, outside her city walls. There she joins a ragged band of humans who are seeking a legend–a possible cure to the disease that killed off most of humankind and created the rabids, the mindless creatures who threaten humans and vampires alike.

But it isn’t easy to pass for human. Especially not around Zeke, who might see past the monster inside her. And Allie soon must decide what–and who–is worth dying for.”