today I’m waiting on RISE OF ORION by my friend Rachel O’Laughlin. The book cover was revealed yesterday on the IceyBooks blog. It’s an Epic Fantasy and it’ll be the third book in the SERENGARD series, sequel to COLDNESS OF MAREK and KNIGHTS OF RILCH (expected publication: 2d December 2014 by Dublin Mist Press). If you’ve been following this blog, you may remember I really enjoyed Books 1 & 2, which means I can’t wait for Book 3 and Mikel’s point of view! 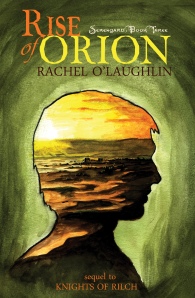 After the border wars, Mikel Orion flees Serengard and seeks haven in the Desert of Aldad. Although he and his sister Kierstaz must become slaves in order to set foot inside its borders, the hot sands hold a bitter kind of peace—one he wants to keep. But he risks destroying the cover story that protects him and Kierstaz when he becomes entangled with an Aldadi girl. Aura has tragic secrets of her own, but she gives Mikel a purpose beyond his birthright…as well as scars that run deeper than skin.

Twelve years later, trouble brews among the Aldadi and the Drei alike. Trapped in a dungeon as the prize prisoner of Trzl—an orchestrator of the rebellion that killed his parents—Mikel is out of maneuvers. Even while Kierstaz gathers a force in the west to attempt his rescue, Trzl sharpens her daggers and begins to resemble the hypnotic ruler she claims to loathe…and Mikel becomes convinced that peace has never been within his reach at all.

KNIGHTS OF RILCH, the sequel to COLDNESS OF MAREK, and the second book in the SERENGARD Series, is out today! 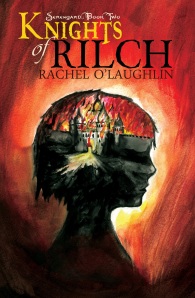 Add it on Goodreads

Buy it on Amazon or on Barnes & Noble

To celebrate this release, I’ve interviewed Rachel O’Laughlin about the process of writing a second book in a trilogy… 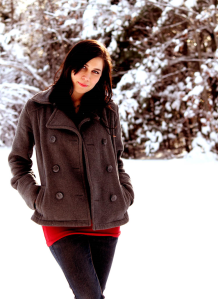 Did you always know Serengard would be a trilogy or not?

Awesome question! I actually had no idea it would be a trilogy. When I drafted Coldness of Marek, I thought I was writing a standalone. Several months later, I felt like there was so much more to tell in order for the story to be understood. I went back to the drawing board and fleshed out a sequel. After drafting Knights of Rilch, I had so much more world building and character development that I wanted to incorporate into Coldness of Marek, so I went back and rewrote it from scratch. That’s when I knew the sequel wasn’t going to be enough and it needed to be a whole series. It’s quite a commitment, but I am thankful I made it. There’s so much more to Serengard than the short adventure I started with.

How did you go about writing this second book?

I made a rough outline via notebook and Scrivener in the month leading up to NaNoWriMo 2012, then I fast-drafted 70k that November. One of the unique things I did with this novel that I haven’t done before or since was having two non-writer friends read each chapter as I wrote. I’m not sure I’ll ever do it again, but it definitely gave me a lot of extra perspective. Early revisions were actually a joy with this book. I loved exploring how a scene could become deeper and darker, even if I had to cut some of it later. I had multiple writer friends and critique partners look at it after each revision — so many I can’t count — and they all had useful feedback for me. From first draft to final draft was exactly one year.

Is your final draft very different from your first one?

Very, very different. (As actually EM can attest! I think you read the second draft, didn’t you?) I had a major epiphany after my third or fourth revision — I chopped off the last half of the book and went an entirely different direction. It turned out to be the best decision ever. The villains are twice as strong, and the action builds up to a point at the end that I could never have envisioned with the first version. I did end up cutting several scenes and chapters from the first half. It was a lot of battle and build-up, and the detail was just bogging it down. My CPs and my editor helped me unsnarl some of the most complicated, touchy scenes, in addition to being total heroes on the line edits. I love how clean and snappy the finished novel turned out.

Would you say writing this second book was harder or easier than writing your first?

Harder. The story centers very much on the brother/sister bond, and that’s a relationship I’ve been driven to write ever since I was fourteen. The action is more complex and intense than the first book, the death toll higher by far. All of that contributed to me shredding scene after scene and reworking my timeline again and again whenever something just wasn’t working, but even more so, I felt this whole novel far deeper than the first. A couple of scenes always make me cry like nothing in Coldness of Marek has. Over all, Knights of Rilch was full of a lot of growing pains, and I think I pushed myself far harder than I have before.

As Knights of Rilch is coming out, is your state of mind different from when Coldness of Marek came out?

I am way less nervous about looking like an amateur, that’s for sure! Coldness of Marek was well received, and that’s made me pretty excited to see what everyone has to say about its sequel. But I’m still a little scared, to be honest. It’s hard to explain why, because having my work out there to be loved or hated is my ultimate dream. I guess it’s a good scared, because there’s really nothing awful that could happen. I appreciate “liked” reviews as much as “disliked”. I’m queasy and thrilled and desperate to hear how readers feel about my sophomore baby.

Rachel O’Laughlin grew up writing adventure stories in which heroines tend to get their hands dirty, bad guys sometimes win, and someone always gets kidnapped. Her passion for history morphed into a love for fantasy in her mid-teens, when she took a brief pause from reality for immersion in the arts and a hands-on education in sustainable living. She lives in New England with her husband and two boys, listens to The Fray, and drinks too many lattes. Two novels in her SERENGARD fantasy series have been released, and a third is scheduled for October 2014.