Welcome to the Successful Queries Blog Series! The idea is to share with you Queries That Worked and to find out what made them stand out in the slushpile. My hope is that it’ll help you, querying writers, to write an amazing query for your own manuscript and to find Your Agent.

Today the very knowledgeable Kate Brauning is sharing her query and answering a few questions. Kate writes contemporary and speculative suspense, both YA and adult, and she’s represented by Carlie Webber at CK Webber Associates. 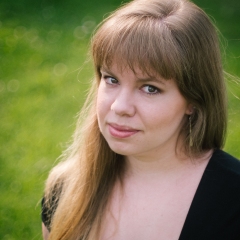 Making out with your cousin has its pitfalls. Seventeen-year-old Jackie hasn’t been able to end her secret relationship with Marcus since he kissed her on a dare. He’s her best friend, which only makes it harder to quit their obsessive relationship.

Except she has to, because she’s falling in love with him. It’s not like it’s illegal to date her cousin, but her parents would never approve and the families would split up their multi-family home. Afraid of losing her best friend, she calls it off. She can’t lose Marcus right now: the cops just found her missing friend’s body.

Hurt and angry, Marcus starts dating the new girl, Sylvia. But with Sylvia comes a secret and a stranger. The stranger starts following Jackie everywhere she goes, and Marcus is nearly killed in a car accident. When Jackie finds out Sylvia lied about not knowing her murdered friend, Jackie’s certain Sylvia is connected to the man threatening Marcus.

The more Jackie finds out about Sylvia, the bigger the wedge between Jackie and Marcus, but she doesn’t have long to figure out what’s going on. She may have lost both her relationship and her friendship with Marcus, but she couldn’t handle losing him for real.

If she doesn’t act fast, Sylvia’s secrets may mean their bodies will be the next ones the police dig out of the Missouri woods.

How long did it take you to write this query?

This query is the product of 3 or 4 drafts and a lot of revisions where I cut a line or changed a phrase. It was hard to write because it has two main conflicts, which was difficult to show clearly.

Did you have beta readers or CPs (or did you enter contests or workshops) to help you with your query?

My CPs helped a ton. I couldn’t do it without them! I didn’t use workshops or contests for critiques for this query, but I did for the first MS I queried.

What was the hardest part to get right: the voice, the plot, the worldbuilding, etc?

Showing the kind of story it is was the most difficult. It’s part thriller, part dark contemporary romance. The taboo element was hard to address. So basically, the toughest part was having the query show the agent what to expect from the pages– which is probably true for most queries!

Any advice for querying writers out there?

Read agent blogs to get a handle on what they’re seeing too much of and what to avoid both in query issues and in issues like the structure of your opening pages and cliche plot elements; get someone to critique your query who knows nothing about your book so you know if it will be clear to agents; start a new project to keep your mind off your inbox while you query!

Most of all, keep at it. Query the MS you have now, write a new one, query that one. Learn how to improve with each one. Persistence gets it done. 🙂

If you want to read my full agent story, and what happened before I got signed, you can read the whole story here: My Agent Story and Before I Got My Agent.

Thank you so much for taking part in this blog series, Kate!

Any questions? Ask below!