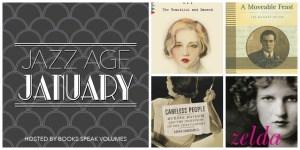 Jazz Age January is a reading challenge hosted by Leah at Books Speak Volumes. The idea is to read books related to the Roaring Twenties during the month of January. If you want to join in the fun, read about it here.

Every girl wants what she can’t have. Seventeen-year-old Gloria Carmody wants the flapper lifestyle and the bobbed hair, cigarettes, and music-filled nights that go with it. Now that she’s engaged to Sebastian Grey, scion of one of Chicago’s most powerful families, Gloria’s party days are over before they’ve even begun… or are they?

Clara Knowles, Gloria’s goody-two-shoes cousin, has arrived to make sure the high-society wedding comes off without a hitch but Clara isn’t as lily-white as she appears. Seems she has some dirty little secrets of her own that she’ll do anything to keep hidden…

Lorraine Dyer, Gloria’s social-climbing best friend, is tired of living in Gloria’s shadow. When Lorraine’s envy spills over into desperate spite, no one is safe. And someone’s going to be very sorry…

From debut author Jillian Larkin, VIXEN is the first novel in the sexy, dangerous, and ridiculously romantic new series set in the Roaring Twenties… when anything goes.

I started reading this book in May 2012 but never finished it at the time. I thought Jazz Age January would be a good time to finally read it. Then I remembered why I had put it down.

This book isn’t a bad book. It’s well written and entertaining. But. The plot is SO SIMILAR to the Bright Young Things trilogy by Anna Godbersen (review here) that it’s very confusing. I couldn’t tell you if I liked this book or not, because all I kept thinking while I was reading it was that it felt I had read it before.

But if you haven’t read Bright Young Things, I guess you should give Vixen a try.

What have you been reading this week? Make sure to leave me a comment below!