this week I’m waiting on City of a Thousand Dolls by Miriam Forster (Expected publication: 5 February 2013 by Harper Teen in the US and 26 February 2013 by HarperCollins in the UK). This upcoming release by US debut author Miriam Forster is part of a trend that sees the publication of YA High Fantasy novels inspired by non-Western cultures. After Stormdancer by Jay Kristoff, the Fire and Thorns series by Rae Carson or Eon by Alison Goodman (and to some extent The Gathering Dark by Leigh Bardugo), here comes another book set outside the usual Medieval Europe setting. And I’m looking forward to reading it! 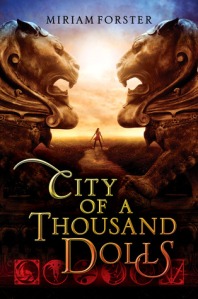 Nisha was abandoned at the gates of the City of a Thousand Dolls when she was just a child. Now sixteen, she lives on the grounds of the isolated estate, where orphan girls apprentice as musicians, healers, courtesans, and, if the rumors are true, assassins. Nisha makes her way as Matron’s assistant, her closest companions the mysterious cats that trail her shadow. Only when she begins a forbidden flirtation with the city’s handsome young courier does she let herself imagine a life outside the walls. Until one by one, girls around her start to die.

Before she becomes the next victim, Nisha decides to uncover the secrets that surround the girls’ deaths. But by getting involved, Nisha jeopardizes not only her own future in the City of a Thousand Dolls—but her own life.”

Which book are you waiting for this week? Feel free to leave me a comment below!

“Waiting On Wednesday” is a weekly event, hosted by book blogger Breaking The Spine, that spotlights upcoming releases that we’re eagerly anticipating. You can see what other bloggers are waiting for here.