This week I’m waiting on THE ASSASSIN’S CURSE by Cassandra Rose Clarke (expected publication: October 2nd 2012 by Strange Chemistry). This is a YA High Fantasy novel and a 2012 debut. 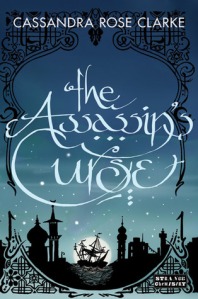 Ananna of the Tanarau abandons ship when her parents try to marry her off to an allying pirate clan: she wants to captain her own boat, not serve as second-in-command to her handsome yet clueless fiance. But her escape has dire consequences when she learns the scorned clan has sent an assassin after her.

And when the assassin, Naji, finally catches up with her, things get even worse. Ananna inadvertently triggers a nasty curse — with a life-altering result. Now Ananna and Naji are forced to become uneasy allies as they work together to break the curse and return their lives back to normal. Or at least as normal as the lives of a pirate and an assassin can be.

I already have way too many books on my TBR list, but I couldn’t resist adding this one to it. The cover is gorgeous and the blurb really intrigues me.

What do you think? Is this book on your TBR list?

And what are you waiting on this week?