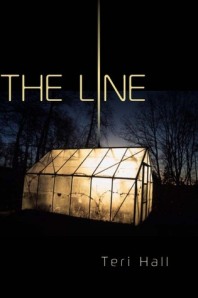 This week I’m reading The Line by US author Teri Hall. Its is a Dystopian novel published in 2010. The second book in the series, called Away, came out last September and I have had them both on my TBR pile for ages. After watching The Hunger Games I have decided it was time for me to dive into this original story.

According to Teri’s website, here is what the series is about:

“Rachel lives with her mother on The Property. The good thing about living there is that it’s far from the city where the oppressive government is most active. The bad thing, at least to most people, is that it’s close to the Line—an uncrossable section of the National Border Defense System, an invisible barrier that encloses the entire country.

She can see the Line from the greenhouse windows, but she is forbidden to go near it. Across the Line is Away, and though Rachel has heard many whispers about the dangers there, she’s never really believed the stories. Until the day she hears a recording that could only have come from across the Line.

It’s a voice asking for help.

Who sent the message? What is her mother hiding? And to what lengths will Rachel go in order to do what she thinks is right?”