Today I’m starting a new blog topic: writers’ interviews. I figured published (and bestselling) authors were the best source of advice for us, would-be-published writers. And the wonderful Rachel Caine has agreed to be the first author to be interviewed!

Rachel Caine is a New York Times, USA Today and internationally bestselling author of more than 30 novels. She had received numerous literary awards and attended over a hundred conventions and conferences in the past twenty years. She has a bachelor’s degree in business administration from Texas Tech University and she has worked in many jobs, before becoming a full time writer in 2010.

On writing:
1.    Did you always know you wanted to be a writer?
Oh NO! I was going to be (in order) an astrobiologist (age 9), a detective (age 12), and a professional musician (ages 14-30). I was a *hobby* writer. But I wrote consistently from age 14 onward.
2.    When and where do you write?
I do my best work in the mornings, the earlier the better, so I try hard to get up at 5 am or so, and work about 8 hours, then knock off for lunch. I usually run errands in the afternoons and work on business items at night.
3.    Do you ever experience writer’s block?
Sure, I think everyone does — but it’s really more of a “day off.” It’s easy to let that day off turn into two, then a week, then a month, and that’s when you’re in trouble. So I never let myself take more than one day off, unless I’m sick. If I get stuck on a story, I try reading it from the beginning, which often does the trick, or if it doesn’t, I jump forward to the next thing I want to write in the timeline.
4.    What do you say to people who want to be writers? How difficult is it to get published?
That’s a complicated question now — much more so than when I started. The easy answer is “not difficult at all” because things like Kindle Direct make it possible to write something and put it out for sale digitally immediately. The HARD part of that is that when you do that, you’re likely doing it way too soon. Becoming a writer is a craft and a skill … something you acquire slowly over time, usually. Your first efforts probably won’t be that great (mine certainly weren’t). In fact, your 10th effort may not be great, either. People grow at different rates in their craft — and the way you find out you’re not ready, in traditional publishing, is that you compete with others for the limited opportunities available. The better you get, the more chance you have to grab that chance. It’s a process that creates not *more* writers, but *better* writers, which is why I still like it.
But more than likely, things will change even more over the next few years … so the answer is: yes, it’s probably pretty easy now. But easy isn’t always a good thing. And it’s still hard to get in with the big professional publishers, and always will be.
5.    Is it better to outline and plot your novel or “go with the flow”?
That depends. Some people work better to go “seat of the pants” … and some won’t start a road trip without a map. I’m a bit of both … I like a road map, but I’m not averse to taking interesting side roads too. I usually have a loose outline.
6.    Do you set goals for yourself as you write?
The deadlines really set them for me — I have a book due every three months, at 100,000 words, so that means I have to write a thousand words a day. The more days off I take, the higher that number gets! 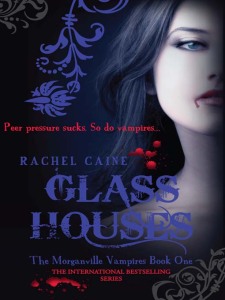 On “The Morganville Vampires” series:
7.    To write this specific series, where did you get your inspiration from?
In the beginning, it was the idea of the town itself … all the layers of secrets (Vampires! Sick vampires! Sick vampires who are the last of their kind! With a secret enemy! … and on and on.) That really excited me.
8.    How did you come up with those characters? Are they based on real people?
I don’t base my characters on real people as a rule, but some of the vampires are historical people. I started with Claire and figured out what she was like, and then filled in characters around her. (And continue to do that!)
9.    What type of music do you listen to when you write this series?
I listen to many different kinds of music, and I find I need NEW music every book … so the first thing I do when I start is pick a few songs to start out with, and look for more music as I go. I tend to like alternative music, with a good sprinkling of pop, rock, some classics, even soundtrack music.
10. What are you working on now? Is it a Morganville Vampires book?
It is! I’m working on Book 13, BITTER BLOOD. And it’s due next week!

Reading advice:
11. Which authors inspire you now?
Every author I read inspires me in some way. We’ve all got strengths and weaknesses as writers … I look for what the other writer does especially well, because it’s usually something I *don’t* do as well. Most of the writers I’ve met are inspiring people as well … beautiful and gracious people!

12. Which YA books would recommend?
There are SO many good ones! I will always recommend Jackie Kessler’s Four Horsemen series … it’s brilliant. Tough and uncompromising, but brilliant. Heather Brewer’s books. Suzanne Collins. Beth Revis. The fabulous Cassandra Claire. Ann Aguirre. And ALWAYS Holly Black. But that only scratches the surface … there are so many amazing writers in YA, and more coming daily — just dig in! It’s a literary feast!

Rachel Caine will be in England from May 4th to May 24th 2012. Check her website for more details.

4 thoughts on “A writer in the spotlight: Rachel Caine”